Buying an electric car via your limited company can be a smart move financially, particularly if you plan to use it for personal journeys as well. It’s therefore not surprising that many business owners now want to learn more about electric cars and tax.

A client of mine decided to buy a £100,000 Porsche for use as a company and personal vehicle. Because the car was 100% electric (not a hybrid) and therefore classed as a zero emissions vehicle, it attracted a benefit in kind rate of only 2% for personal use.

Therefore, my client had to declare a £2,000 benefit in kind on his Self-Assessment Tax Return, which was then taxed at 40%. The cost to him, therefore, was £800 per year.

The company itself also had to pay Class 1A National Insurance on the benefit in kind. At a rate of 15.05%, this meant the annual cost to the firm was £301.

But why buy the car via the company? The simple reason is that the £100,000 cost price can be deducted as a capital allowance. Electric cars with zero CO2 emissions qualify as an ‘enhanced capital allowance’, which is a type of first year allowance. What this meant in practice was that his company could deduct the full cost of the car from its pre-tax profits.

If you want to take advantage of the same tax breaks, you need to make sure you understand the rules. Not doing so can lead you to make some costly mistakes.

In particular, it’s worth noting the following things:

What happens if I buy a second-hand or hybrid electric car?

If you buy a second-hand electric car, it does not qualify for the enhanced capital allowance. This means you can’t deduct 100% of the cost against your pre-tax profits in the first year.

If you choose a hybrid car, you also get taxed more on the benefit in kind. For hybrid cars, the rate depends on two factors: CO2 emissions and range. The table below lists the tax rates between 2022 and 2025.

As you’ve seen, buying a new, fully electric car via your limited company can significantly reduce your tax bill. However, leasing an electric car can also make good financial sense, as can acquiring one via a salary sacrifice scheme. We’ll be looking at both of these scenarios in an upcoming blog post but if you’d like advice on the best way of investing in company cars, please do give your THP account manager a call. 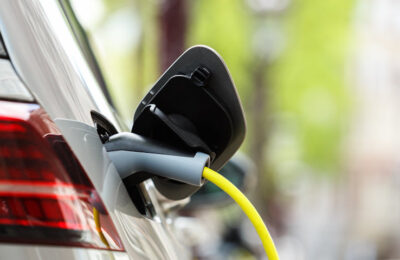